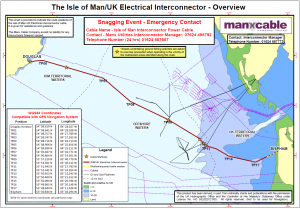 The Interconnector Cable comprises both a 132kV AC power cable bundled with a fibre optic communications cable.  It was installed in September 2000, and carries around 65MW of electricity to the Isle of Man, roughly 90% of the Island’s daytime electricity requirements.

The cable was buried using a cable plough when it was installed.  For 93% of the cable route it is buried at a depth of 1.8-2.0m.  Cable burial is important both to protect the cable and ensure that it is not a hazard for fishing vessels.

An information leaflet about the Interconnector Cable for mariners operating in the area can be downloaded here.  The key features of the cable route of interest to mariners are summarised below.

At several points along the cable route the cable is surface laid where there are joints between sections of the cable and where it crosses other cables and pipelines.

To protect the surface laid cable and to ensure that fishing can continue safely along the route, protective mattresses have been installed at six locations. Details of these locations are given in maps here.

Surveys in 2011 found that there was some movement of the rock mattresses closest to the Lancashire coast.  You can download a notice about potential hazards in this area here. 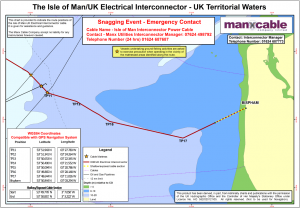 The seabed close to the Lancashire coast is very mobile.  Parts of the cable lying within 2 nautical miles of the coast may occasionally be exposed by movements of the sand on the seabed.  The recent location of the exposed cable is shown in the map on the right.

The Manx Cable Company monitor the cable carefully along this part of the route, and have published a notice to mariners based on recent survey information here.

AWJ Marine are pleased to provide fishery liaison services for the Manx Cable Company.  We act to ensure that all fishermen and fishermen’s organisations along the route are informed of all survey and maintenance work and are also alerted to any potential hazards associated with the Interconnector Cable.

You can read our latest updates for mariners and fishermen below.  You can also sign up for project updates to be delivered straight to your Inbox on our News Subscriptions page.  It’s quick, easy, free and secure.

If you have any queries about the Isle of Man Interconnector Cable, please contact us.