Mains electricity power is provided to the 3,000 residents of Jura, Islay and Colonsay by an undersea electricity cable that crosses the Sound of Jura between mainland Scotland and the Isle of Jura.  A cable was first installed on this route to supply the islands in 1971.  It is the only electricity connection between the mainland and Jura.  On the 20th June 2014 the cable failed, and power was supplied to the islands by a temporary backup generator at Bowmore. 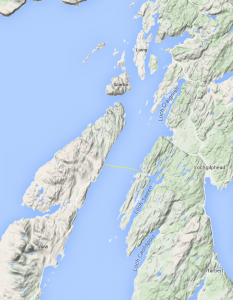 Scottish and Southern Energy Power Distribution (SSEPD) applied to Marine Scotland for consent to repair the cable when it failed.   Due to the location of the fault and known condition of the cable SSEPD determined that the best solution would be to repair the subsea cable by fully replacing it end to end.  In November 2014 consent was granted by Marine Scotland for the replacement of the cable.

In early December 2014 a new 33kV subsea cable was installed along an existing route which had been occupied by the original subsea cable since 1971.  This cable route across the Sound of Jura has varied seabed conditions and is one of the deepest crossings, at 202m, of all the subsea cables owned and operated by SSEPD around Scotland.

As part of the licence conditions, survey works were also undertaken along the route, which included Bathymetric surveys, Seismic surveys, Benthic surveys and Vibrocoring.  These surveys will be used to identify what methods of protection will be required down to the 50m contour on each shore end, as per the licence conditions.  Once the final protection methodology has been developed it is proposed that the works will be completed by July 2015.  All associated notice to mariners and communications to the relevant authorities will be made in advance of any additional works in the area taking place.

The electricity cable between Carsaig Bay on the Scottish mainland and Lealt Bay on the Isle of Jura was installed in 1971.  At the end of the operating life of the original cable, it was replaced along the same route in 1991.

The cable is owned and operated by Scottish and Southern Energy Power Disribution (SSEPD).  It is one of 111 cables that connect Scottish islands to the mainland electricity grid that are operated and maintained by SSEPD.  All of these apart from one are surface laid cables.

SSEPD is regulated by Ofgem (the Office of Gas and Electricity Markets).  SSEPD expenditure has to conform to an 8 year plan agreed with Ofgem, and funded by its customers.  The current Price Control period expires on 31st March 2015, and the next period runs from 2015-2023.

Construction updates for the Jura – Mainland Cable are posted on this website.  You can read past updates below, and you can sign up for project updates to be delivered straight to your Inbox on our News Subscriptions page.  It’s quick, easy, free and secure.

If you have any queries about the Jura – Mainland Cable, please contact us.

All of the installation and survey work on the cable has now been completed.  The cable was installed an energised on Sunday 7th December 2014, and the survey work along the  cable route was completed on Saturday 13th December 2014.  All … Continue reading →

The replacement Jura – mainland electricity cable operated by Scottish & Southern Energy Power Distribution (SSEPD) was laid across the Sound of Jura from Carsaig Bay on the mainland to Lealt Bay on Jura yesterday, 3rd December 2014 by Briggs … Continue reading →

Scottish & Southern Energy Power Distribution (SSEPD) have announced that cable laying work will start this morning (Wednesday 3rd December 2014) on the replacement Jura-Mainland electricity cable.  Cable laying should be completed by Briggs Marine by the end of the … Continue reading →

Scottish and Southern Energy Power Distribution have recently been granted consent to replace the power cable between the Mainland and the Isle of Jura between late November and early December 2014.  Notices to Mariners have been issued to advise seafarers … Continue reading →